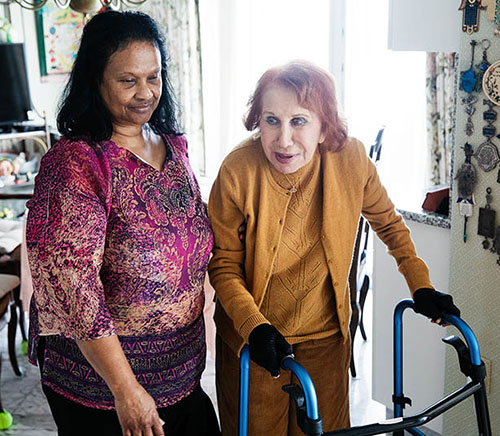 In 2016 Nanny broke her hip and began looking for daily care. She asked around, and several acquaintances highly recommended a woman named Dawn Henry. Dawn was a highly experienced caretaker with several licenses and a long history of caring for the elderly. Dawn, born in Jamaica, West Indies, now lived in a lovely home in Hollywood, Florida, a thirty-minute drive from Nanny’s home, with her husband, Lance Henry, a general contractor, and her college-age son Zach. When Dawn and Nanny first met, there was an instant connection. “I fell in love with this lovely little woman immediately,” Dawn said. “I knew she was a real mensch.”

Dawn often sprinkles Yiddish words and phrases into her thick Jamaican-accented English vocabulary. I can’t help but laugh when she tells me, as she often does, that she knew something wasn’t quite “kosher” with Evan and Avi from day one. When Dawn called Nanny’s grandsons “goniffs” (thieves), it turned out she knew what she was saying. It didn’t sit right with Dawn when Evan and Avi’s family strong-armed Beverley to change her will soon after she moved to Florida. She thought it was odd when Evan brought a paper shredder into Nanny’s apartment. Dawn didn’t like how dismissive her grandsons were whenever Nanny asked questions about her financial account. Most of all, Dawn knew they were not treating my grandmother with respect, often talking to her in a condescending and demeaning manner.

Dawn felt something had gone awry. A highly intelligent, strong, instinctual, and outspoken woman, Dawn would become the whistleblower for the now 94-year-old woman she looked after and adored. She contacted a few select family members whom she felt she could trust and relayed to us her suspicions. Living with Nanny full time, Dawn had a front-row seat to what was going on with “the boys” who often stayed one floor below with their parents, and she didn’t like it one bit.

Nanny’s suspicions began to grow as well—none of her questions about her funds were being adequately answered, and when she called her grandsons at their J.P. Morgan office, they always seemed to have a reason why they couldn’t speak to her. She started to jot down her suspicions and her grief in a black leather-bound diary. “I needed to put it in writing,” she said. “I was trying to make sense of it.”

Since Evan and Avi’s parents, Bobby and Caroline, live one floor below Nanny, it was easy for them to take the elevator up one flight and harangue her as they attempted to distort reality. “Nothing’s happening! Let it go. They’re good boys. Everyone knows you have Alzheimer’s!” Whether they just walked into the backdoor of her apartment with the spare key, waylaid her at the pool, or began an embarrassing public argument on the street: Dawn saw it all, and she continued to urge Beverley to fight back.

And soon enough—she did. With experienced attorneys, the support of her other children and grandchildren, and of course the one and only Dawn Henry, my grandma found her voice and her inner strength, and she chose to seek justice.

“She’s the real mensch,” Beverley quips, nodding her head at Dawn. “She saved my life.” Modestly, Dawn demurs at this dramatization, but she does wholeheartedly recognize that Nanny’s mood and physical health had consistently deteriorated throughout the legal proceedings. “She couldn’t sleep. She hardly ate and lost a lot of weight. Weight she couldn’t afford to lose! I took her to the doctor when her hair started falling out. She was sick with worry. Shame on them! All of them,” Dawn says.

As one of Nanny’s many new admirers wrote last week (a former housekeeper from Ireland, no less), “So well done to you! I am sure there are many such victims, I trust you will give them the courage to speak up. And more to discourage such ‘in-house’ criminals. God bless, stay well.”

Thank you, Dawn Henry. You are a hero.