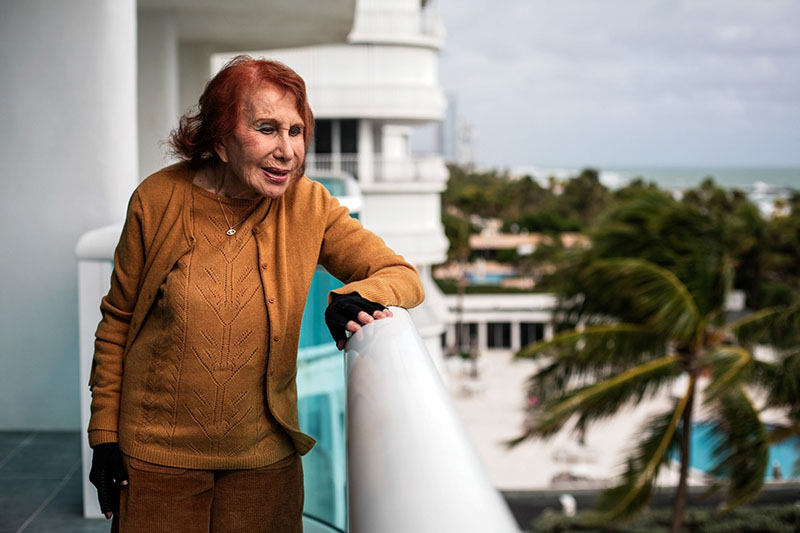 A 95-year-old Florida woman who won an arbitration fight against her banker grandsons is now battling them in court — seeking to collect the award, and also to preserve her ability to speak freely about her experience.

Beverley Schottenstein prevailed earlier this year in a financial industry arbitration after accusing JPMorgan Chase & Co., and two of her grandsons who handled her account there, of improper trading in her $80 million portfolio, in a case that highlighted the complications and conflicts that can arise when bankers manage money for family members.

The panel found JPMorgan’s securities unit and the two advisers liable for abusing their fiduciary duty and making fraudulent misrepresentations. It also found the bank and one of the grandsons, Evan Schottenstein, liable for elder abuse, ordering about $19 million in damages.

The day the February ruling became public, Beverley Schottenstein filed a lawsuit in federal court in Miami seeking to collect. JPMorgan paid its $9 million portion. The grandsons, Evan and Avi Schottenstein, sought to have the arbitration ruling against them vacated. Within weeks, Beverley and the grandsons began seeking a resolution, and by mid-March, the parties notified the court that they had reached an oral agreement on an amount, and that a written settlement was likely forthcoming in a week.

But the deal was derailed. A lawyer for the grandsons sent Beverley’s lawyers proposed settlement terms, which included no admissions of wrongdoing and a confidentiality order that bound Beverley and anyone associated with her from speaking about the resolution and facts behind the arbitration, according to court records. The proposed settlement didn’t bar the grandsons from speaking about the case. Beverley never agreed to those provisions, her lawyer said in court filings. No papers were signed and no money ever exchanged hands.

“I said forget it. I would never sign anything like that,” Beverley said in an interview. “The heck with them, let the boys go to work, or go to jail. One or the other, I don’t care anymore.”

A lawyer for Evan and Avi didn’t respond to messages seeking comment. A JPMorgan spokeswoman declined to comment.

A few months later, in a June 29 filing, Evan and Avi asked the judge to enforce the deal — the $4 million payment they said the sides had agreed upon, as well as the gag order. They also alleged that Beverley was already in breach of the confidentiality provision because one of her granddaughters had blogged about the $4 million offer. They cited Florida law that allows for settlements to be considered lawful even without the signatures of the parties.

“The issue comes up enough that most attorneys know how to avoid it or to use it to their advantage,” said Clay Roesch, a business litigator in Orlando who isn’t involved in the Schottenstein case.

Roesch said the judge may consider the email communications between the lawyers negotiating the resolution to determine whether there were agreements on key elements of the deal. Certain provisions, such as confidentiality, could have been agreed upon without Beverley’s specific consent if her lawyer had the authority to negotiate terms on her behalf, said Roesch, a partner at Shuffield, Lowman & Wilson. Beverley’s lawyer told the court he didn’t make such an agreement.

The judge overseeing the case has been considering the dispute for months and may not make a decision until the new year, Beverley said in the interview. More arguments were filed in court this month.

Beverley, whose late husband was part of the Columbus, Ohio, family that ran a chain of department stores, was the subject of a Bloomberg articleoutlining what she says happened to her estate under her grandsons’ management while at JPMorgan. The bank, which dismissed the brothers in 2019, has said the advisers are no longer with the firm and that their actions don’t represent JPMorgan’s values.

In the arbitration case — brought before the Financial Industry Regulatory Authority, known as Finra — she accused them of running up commissions by putting her money in risky investments without telling her. She kept a diary that detailed unexplained credit-card charges and missing account statements. She also alleged document shredding by Evan in her Miami-area condo, and a forged signature on investment documents.

While details of Finra arbitrations are typically kept confidential by the parties, Beverley said she decided to speak out to warn others of the potential for elder abuse and draw attention to it happening at America’s largest bank. She said she later received dozens of letters thanking her and sharing experiences with money management by family members.

In April, Evan Schottenstein was barred by Finra after refusing to meet with its enforcement investigators, who were looking into his grandmother’s allegations, according to documents filed with Finra. Without admitting or denying wrongdoing, Evan accepted the punishment, effectively ending the regulator’s investigation into him. A spokesman for Finra declined to comment.

The court proceedings and legal fees that followed will likely be pulled from any money Beverley recovers. The brothers have said Beverley should pay for their attorneys’ fees stemming from the settlement dispute because of the alleged confidentiality breach.

The dispute went so far as an evidentiary hearing last month before a federal judge in Miami where a half dozen lawyers appeared or testified for about four hours over Zoom. Beverley wasn’t called as a witness, nor was Evan, who has been living in a family condominium unit one floor below Beverley’s.

Lawyers for Evan and Avi said that at the time of the proposed March settlement, Beverley’s lawyer, Scott Ilgenfritz, orally agreed that the settlement would be kept confidential. He later sent a proposed agreement to the grandson’s lawyer, Peter Fruin, that contained a confidentiality clause. That term, Fruin said in court papers, was breached in April when Beverley’s granddaughter, Cathy Schottenstein Pattap, posted on her blog that her cousins were in talks to settle for $4 million of the nearly $10 million they owed.

Ilgenfritz told the judge that he never agreed to confidentiality on behalf of Beverley and couldn’t have because a final agreement was never reached. He told the court that the confidentiality provision as well as a non-disparagement provision were inserted into the document by the grandsons’ legal team. Both provisions, he said, were one-sided, seeking to silence Beverley but not her grandsons.

Ilgenfritz did propose a less restrictive confidentiality clause that would apply to both sides, according to court documents. Ilgenfritz declined to comment, saying a new law firm has taken over the lead in representing Beverley in the matter.

Fruin said in court papers that Ilgenfritz didn’t object to the deal including a confidentiality provision until Pattap’s blog post was brought to his attention. He said Evan and Avi  liquidated investments earlier this year in anticipation of the settlement being formalized. Even if the judge won’t enforce the confidentiality provision, he argued the court should still make Beverley accept the $4 million deal.

“Even though technically she won” in the Finra arbitration, it doesn’t feel that way now, said Pattap, the granddaughter.

“She shouldn’t still be fighting to get her victory,” Pattap said in an interview. “I feel like the people who are victorious are the lawyers on all sides here and not my grandmother and not my cousins.”

Beverley now says she doesn’t want to settle for the reduced amount and that it may be her children and other grandchildren who will have to fight to try and collect in full.

The Systematic Abuse of Britney Spears:

BenBella Books is excited to announce our new partnership with Cathy Schott...
Scroll to top