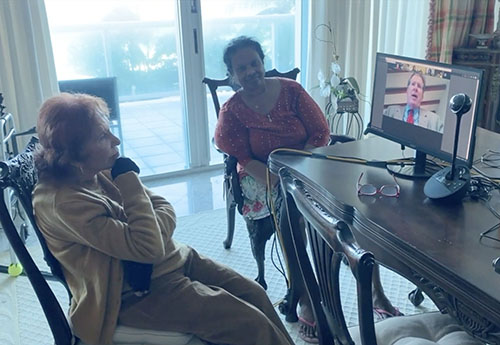 Though none of Evan and Avi’s accusations about Nanny were true, the irony is, if they had simply come clean, she would have forgiven them. They did not need to lie or cheat or steal. They just needed to level with her and treat her with the dignity she deserved. She trusted them, and they took advantage of her. No senior deserves this treatment—especially not from one’s own flesh and blood.

Elder abuse is a scourge, and it has gotten worse during the COVID-19 pandemic for many reasons, including the increased vulnerability of older men and women. Approximately 1 in 10 Americans aged 60+ have experienced some form of elder abuse. Some estimates range as high as 5 million elders abused each year. One study estimates that only 1 in 14 cases of elder abuse are reported to authorities.

And sadly, the financial system is stacked against elders. FINRA is a “self-regulatory” system fundamentally designed to shield the banks from public scrutiny. FINRA proceedings such as my grandma’s trial are purposefully kept private except for the judgment. This protects banks from shameful, often criminal, allegations. No one would have known Nanny’s story without her bravely talking to Bloomberg. All the abuses for which Evan and Avi were found liable would have been swept under the rug. We heard from many people after the Bloomberg article came out, and some individuals commented after reading the article that they simply didn’t have the money to hire lawyers and wait years to go through an exhausting FINRA trial even though they too had been wronged.

Though we may not all see it firsthand, elder abuse is everywhere—even in the movies. In the new release of the dark comedy thriller written and directed by J Blakeson, I Care a Lot, a heartbreaking scene transpires in which the sociopathic Marla (Rosamund Pike) and her network of enablers escort the unsuspecting Jennifer (Dianne Wiest) out of her home and into an assisted-living facility so they can lay siege to her assets. Marla’s scheme is guardianship: identifying powerless elders, having them falsely declared mentally incompetent (often by claiming “memory loss”), isolating them from loved ones, and placing them under her legal conservatorship. She then empties Jennifer’s safe deposit box, pockets her diamonds, and puts her home up for sale. Who’s to stop her? Certainly not the poor old lady she has drugged up in the nursing home without access to her cell phone. She’s playing the system, and it doesn’t seem too hard. Blakeson’s film is a powerful demonstration of Oscar Wilde’s famous quote, “Life imitates Art far more than Art imitates Life.”

After the Beverley Schottenstein trial went public, thanks to Bloomberg.com, other media picked up the story, including my original hometown’s daily newspaper, The Columbus Dispatch. Public reaction has been overwhelmingly positive. People have reached out to praise my grandmother for her courage. Nanny and I were even asked to share our experience on WOSU Public Radio this morning. Some told of similar experiences within their family or with unscrupulous financial advisers. Many who have reached out to me said they were deeply moved by the courage shown by a woman of Nanny’s age and expressed disgust that her close kin would do this to her. Others wanted to make sure that my grandmother understood the dynamic of victim blaming—fearful that she might be gaslighted.

Nanny—well, she’s a pistol. I didn’t think it was possible to love her even more, but I do. Her story deserves to be seen and heard, and I will continue to write about it—and about elder abuse in general—in my new weekly blogs. Her story is a cautionary tale. If anyone can be inspired and motivated to protect themselves better after reading what she has been through in her quest for justice and dignity—it will all be worthwhile.

In the meantime, if you have not yet read her full story, I invite you to click on these sites below, and visit us here at cathyschottenstein.com for more breaking news. This is only the tip of the iceberg.