Blog - Latest News
You are here: Home1 / My Grandma is a 94-Year-Old #MeToo Warrior 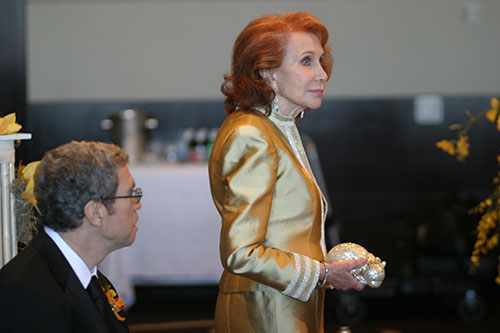 In 2017 after The New York Times published its exposé detailing sexual abuse allegations against producer Harvey Weinstein, many high-profile celebrities including Gwyneth Paltrow, Ashley Judd, Jennifer Lawrence, and Uma Thurman came forward with their own harrowing tales of sexual harassment. Their courage—and the resulting widespread media coverage—helped make the “Me Too” movement a topic of conversation across America. The phrase #MeToo went viral and became synonymous with female empowerment. Over time, #MeToo developed into an even broader movement. While sexual abuse and harassment are the most prevalent grievous acts associated with the movement, at its heart, #MeToo is about women standing in solidarity, telling their truths, and refusing to be victimized.

My grandmother Beverley Schottenstein is 94 years old. Two years ago, when she decided to take on J.P. Morgan, a trillion-dollar, male-dominated Wall Street institution, and two of her own grandsons, Evan and Avi Schottenstein, she became yet another #MeToo warrior. Beverley’s quest for justice led her to uncover years of elder abuse and criminal activity perpetrated by her grandsons within one of the biggest and most famous banks in the world.

Up until that point, Beverley had become accustomed to being treated like an inferior. When she would ask how her money was doing, my cousin Evan would consistently dismiss her concerns, saying, “Don’t worry. I’m taking care of everything.” But my grandma knew something was wrong. In early 2019 she finally decided to move her account away from J.P. Morgan and her grandsons. At one point during a critical meeting in the summer of 2019, Beverley’s current broker at a major bank and rival of J.P. Morgan’s discouraged her from filing a claim against J.P. Morgan, saying “If you were in your 70’s I wouldn’t hesitate to seek justice, but do you really need this at your age? J.P. Morgan has wall to wall lawyers.” As though my grandma stopped being a victim sometime in her 90’s!

J.P. Morgan managed to turn my grandmother’s case into a nasty, expensive, and profoundly damaging battle that pitted one family member against another. The bank even went so far as to pay for Evan and Avi’s attorneys after the institution fired the disgraced brokers. Throughout her legal battle, my grandma endured unrelenting harassment by her grandsons and their family, and on more than one occasion, she was secretly videotaped without her knowledge or consent from within the confines of her own condominium building.

In early February of this year, FINRA—the Financial Industry Regulatory Authority—ruled that J.P. Morgan and my first cousin Evan Schottenstein were liable for elder abuse against my grandmother. In New York, where the crimes were committed, elder abuse is a felony punishable by several years in jail. FINRA further declared that J.P. Morgan, Evan Schottenstein, and Avi Schottenstein were liable for constructive fraud, abuse of fiduciary duty, and fraudulent misrepresentations and omissions. The award was a headline-making $19 million dollars and quickly went global thanks to a feature article and video put out by Bloomberg News one week after the verdict.

Though FINRA kept my grandmother’s trial private, Beverley’s willingness to “go public” with her story is yet another element that ties her to the #MeToo movement. Her brave stance against elder abuse shows people everywhere that no matter what age you are, or how powerful your adversaries may be, you can and must stand up for yourself, and that if you do—you will be heard. You will be believed. You will be helped.

One of the biggest effects of the #MeToo movement has been to reveal the prevalence of sexual harassment, assault, and other misconduct against women. As more and more survivors spoke out, victims discovered that they were definitely not alone: exactly what Tarana Burke so desperately wanted them to know. People who had not directly encountered sexual misconduct were shocked to learn how many of their close friends, co-workers, and even family members had experienced sexual assault and had felt the need to keep their experiences to themselves out of shame or guilt.

One of the systemic problems exposed during the coverage of Harvey Weinstein and other powerful men was the use of nondisclosure agreements. The Los Angeles Times reported that as part of a settlement, Zelda Perkins, Weinstein’s former assistant, was forced to sign an agreement that prevented her from telling even her own family members that Weinstein had exposed himself to her repeatedly, including forcing her to take dictation while he bathed! “I don’t think I understood the impact of being silent for 20 years,” Perkins told the LA Times. “Under the new laws, others may have an easier time speaking out.”

As her story and others make clear, such agreements allow wealthy and powerful people to essentially buy others’ silence, preventing anyone from uncovering the allegations against them—and potentially putting others at risk. In September 2018, California banned the nondisclosure agreements in cases involving sexual assault, harassment, or sex discrimination. New York and New Jersey enacted similar laws. The federal BE HEARD Act—introduced earlier this year, also bans some types of nondisclosure agreements.

Like these sexual assault cases, FINRA, J.P. Morgan, and my cousins made my grandmother sign a non-disclosure agreement that forbade her from disclosing private trial details before her judgement was rendered. After Beverley won her case, J.P. Morgan saw my website, cathyschottenstein.com, and became irate that I was publicly disclosing arbitration trial details that FINRA normally keeps private. The pandemic forced Beverley’s entire proceedings onto Zoom, and there were no rules against a bystander (me) videotaping parts of the trial on my cell phone as I watched alongside my grandma at her dining room table. Though I agreed to take the stand and testified under oath against my cousins, a dreadful experience that lasted two days, I was not a party in my grandma’s case. J.P. Morgan nevertheless threatened to sue my grandma for breaking the confidentiality agreement FINRA made her sign to keep all trial matters quiet. In the end, to protect my grandmother from even more ugliness, I chose to take one video off my website.

My grandmother’s story is both a cautionary tale and an inspiration. After everything she’s endured, Beverley’s essential message is this: If someone is abusing you, sexually, financially, or otherwise—tell someone. Make your voice heard. You will be believed! You may even have an opportunity to seek justice.

*UPDATE: On 4/7/21 FINRA barred Evan Schottenstein indefinitely from all capacities within the brokerage industry. For more details, please visit https://brokercheck.finra.org/individual/summary/4929175

Illustration of difference between public, private shown in case of 93-year...
Scroll to top